Obituary for William A. "Archie" Woodburn 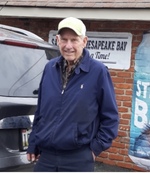 William “Archie” Woodburn a lifelong resident of Annapolis, MD passed suddenly on Thursday, May 7 at the Anne Arundel Medical Center. Born on April 14, 1932 in Annapolis to the late William A. and Ethlynn Purdy Woodburn. Archie spent most of his childhood in Solomons Island Md. He would often ride the bus, his father drove back and forth from Solomons to Annapolis as a young child. He was a graduate of Annapolis High School. Soon he would serve in the U.S. Navy Reserves for 10 years. He retired from the C & P Telephone Co. as a Cable Splice man in 1986.Archie was President for Southern Maryland Telco Federal Credit Union. He was a devout Christian, who was raised and continued worship as a member of Edgewater United Methodist Church. Archie married his high school sweetheart. Archie and Bunnie meticulously built the home that they currently reside in of 68 years.In his spare time Archie enjoyed woodworking, crabbing, fishing and oystering on his 30 ft. wooden boat built by family in Solomons. Archie purchased a 1924 Hup Mobile approximately 20 years ago. He took pride and enjoyed spending Thursday evenings at the Green Turtle in Edgewater with the “Wheels from the Past” car club where he was a member. He would always look forward each year to participate in the 4th of July Parade in Galesville and the “pie run” to Deale on Thanksgiving Day with his Hup. Archie had the greatest love for his family. He is survived by his wife of 68 years, Elizabeth Westphal Woodburn whom he cherished; his beloved daughters, Beth (Brian) Schiesher of Illinois, Mary Carol (Robert) Rogowski of Odenton, MD and Bunny (Ross) Moreland of West River, MD; his sister, Elaine Crow of Glen Burnie, MD and his grandchildren, Scott Hendrickson, Megan Michelle Shepherd, William Woodburn Shepherd, Amy Beth Steier, Beth Ann Sachs, Joni Sheen, Julie Sokola and Jennifer Moreland. He is also survived by 13 Great Grandchildren. Due to the current restrictions, funeral services will be private. Condolences may be made online at: KalasFuneralHomes.com

In lieu of flowers, donations may be made to Edgewater United Methodist Church 2768 Solomons Island Rd. Edgewater, MD. 21037