To share your memory on the wall of William Woodburn, sign in using one of the following options:

In lieu of flowers, donations may be made to Edgewater United Methodist Church 2768 Solomons Island Rd. Edgewater, MD. 21037
Read Less

Posted May 12, 2020 at 11:29pm
I think I’ll remember Archie mostly as a great family man. He loved his Wife, his Girls and all of his Grandchildren. A smile was always on his face and a twinkle in his eyes. I loved hearing stories about his boat and his Hubster Car. Rest In Peace Archie and thanks for being a Good Guy! Love, Debbie Zacharko
Comment Share
Share via:
CM

Posted May 12, 2020 at 05:01pm
It was always a pleasure working with Archie at SMDTelcoFCU, and hearing about his adventures with his car.
Jim & Betty Harrison
Comment Share
Share via:
SO

Posted May 10, 2020 at 03:14pm
So sorry for your loss. Fond memories of swimming and Pony Club get together with the Woodburn family. Thinking of Everyone!

I am so very sorry for your loss. Keeping you all in my thoughts and prayers.
BM

Thank you, Suzanne! Our families really did have the very best childhood growing up! So many good, hardworking, fun times! Hard to fathom, our Dad, part of our history, is gone! We know he is watching over us all! "Fly high Daddy"!
DJ

Bunny, I am so sorry for you and your family. I know how close you were. I will keep you all in my thoughts and prayers. Fondly, Dianne Jones
3 Comments | Show All 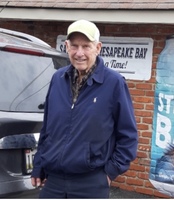