To share your memory on the wall of William Vita, Jr., sign in using one of the following options:

Provide comfort for the family by sending flowers or planting a tree in memory of William Vita, Jr.

Provide comfort for the family of William Vita, Jr. with a meaningful gesture of sympathy.

Print
William J. "Bill" Vita, 88, a resident of Annapolis, MD, passed away on Monday, June 3 at his home after a long struggle with a rare form of leukemia. He is survived by his wife of 64 years, Dolores "Dee" Vita; his children, Joseph (Phyllis) Vita, Ma... Read More
William J. "Bill" Vita, 88, a resident of Annapolis, MD, passed away on Monday, June 3 at his home after a long struggle with a rare form of leukemia. He is survived by his wife of 64 years, Dolores "Dee" Vita; his children, Joseph (Phyllis) Vita, Maria and Theresa; his siblings, Frank (Sue) and Joseph (Debbie) Vita and Cathy (Vaughan) Sawdon; his seven grandchildren, Nicholas, Frank, Aloysius, Mary, Joey, Kristina and Sierra; his great-granddaughter, Eliana and his nieces and nephews ,who he dearly loved. He was preceded in death by his beloved daughter, Joan and his sister, Margaret "Margie" (Thomas) McKnight. Born on July 16, 1930, in Washington, DC to the late William and Mary Agnes Vita, Bill graduated from St. Peter's Elementary School and St. Paul's Academy where he played baseball and basketball. He also played baseball and football with the Police Boys Club. After much persistence, Bill was offered the job of ball boy for the Washington Senators Baseball team from 1945 to 1947- a dream come true. He served in the U.S. Navy during the Korean Conflict and after being honorably discharged in 1955, he worked for C&P Telephone Co. for ten years. Bill met Dolores at a Knights of Columbus dance and they hit it off immediately. They shared their Catholic faith and enjoyed dancing. They were richly blessed, greatly challenged and have been surrounded by many friends over the years. Bill’s father took him to his first Redskin football game in 1941 and he loved it. He would go and see them play every chance he could. Then in 1962 Dolores, his naïve wife gave him season tickets that made him a lifelong Redskin fan. He often took his children to the games making them avid fans as well. Bill’s friend, Jack Healey became known as the official cook for all the tailgate parties they enjoyed. All of us continued to watch the games with him, including this year. Theresa and Maria recently took him to the Nationals Park, where Bill saw pictures of some of the games that he worked and a matching stadium chair he had from the old Griffith Stadium given to him by his brother, Frank. Bill played softball at the Knights of Columbus in College Park for over 25 years. He coached CYO Baseball and Basketball at St. Bernard’s Catholic Church in Riverdale and was also the Athletic Director for several years. He really enjoyed playing sports and coaching. He passed on his love of sports to all of his children, sometimes coaching them and always attending their games. Some of the boys he coached and later played with at the Knights stayed in touch with him over the years, much to his pride and joy. In 1966 his brother-in-law, Fr. Aloysius Schwartz, a Missionary priest working in Korea offered Bill the position of Executive Director of his fundraising office. Bill took a leap of faith, left his job, and worked for Korean Relief for 31 years. After his first visit to Korea in 1969, Bill was so impressed he wanted to share stories about Fr. Al’s amazing programs. He put together a packet of information about Fr. Al’s work with the orphans who were destitute and sick following the devastation of the Korean War. Fr. Al founded the Sisters of Mary and the Brothers of Christ to assist him with the orphans and handicapped. Bill Willoughby, the Religious Editor of the Washington Star picked up his story. In his first article, the headline read, “Washington’s Saint in the Making". He wrote ten articles about Fr. Al from 1977 to 1984. One of his articles attracted President Ronald Reagan who in turn wrote several letters to Fr. Al praising his work. Bill also connected with Rep. Steny Hoyer who in turn nominated Fr. Al for the Nobel Peace Prize. Bill quickly assumed the role of Fr. Al’s Public Relations Man. The work expanded to the Philippines and then Mexico just before Fr. Al died of ALS in 1992. Bill always said he was blessed to have the opportunity to work with Fr. Al and Fr. Al was grateful to have Bill’s dedication. The family wants to thank the Hospice of the Chesapeake team, especially Nurse Kristina Marquez and all the aides who lovingly cared for Bill in every way. Friends are invited to celebrate Bill's life on Monday, June 10 from 2 to 4 and 6 to 8 pm at the Kalas Funeral Home & Crematory, 2973 Solomons Island Rd., Edgewater, MD. Mass of Christian Burial will be offered on Tuesday, June 11 at 9 am at St. John Neumann Catholic Church, 620 Bestgate Rd., Annapolis, MD followed by a reception in Seelos Hall. Interment will follow at Ft. Lincoln Cemetery in Brentwood, MD. In lieu of flowers, contributions may be made to The Hospice of the Chesapeake, 90 Ritchie Hwy., Pasadena, MD 21122 or online at https://www.hospicechesapeake.org/giving/.

Condolences may be made by clicking the Memory Wall link on this page.
Read Less

Mark and Kim Pacheco and family and Hynes & Waller, Family have sent flowers to the family of William J. "Bill" Vita, Jr..
Show you care by sending flowers

Posted Jun 10, 2019 at 04:53pm
Bill never coached me at St. Bernard's, but I knew him. I played softball with him at the Knights of Columbus in College Park for years and had many a tailgate experience at RFK with him and Jack Healy. He took me to the only hockey games I ever attended and gave my nephew tickets to the MLB All-Star Game at Camden Yards (as long as he brought back a program for Bill). I have played many rounds of golf with Bill and was there when he got a birdie. Actually, he hit a goose with his tee shot, but he still said it counted as getting a birdie .... I wasn't about to argue! I always enjoyed spending time with Bill .... from softball games, to softball parties, Redskin's games, the Touchdown Club, hockey, and golf. I told my brother that I would celebrate Bill by putting ice in the next glass of beer that I have .... I just wish I was at Applebee's with him again to enjoy that beer .....

Posted Jun 10, 2019 at 11:03am
Please accept our most heartfelt sympathies for your loss... Our thoughts are with you and your family during this difficult time.

Flowers were purchased for the family of William Vita, Jr.. Send Flowers

Posted Jun 10, 2019 at 10:26am
Mr. Vita as we called him or coach. He was such a kind and caring person. As I played sports, he was a great coach. He understood kids. He spent extensive time coaching all of us. As I use to live right behind his house in Riverdale, he always let us shoot baskets in his driveway. He was a great person. I will truly miss him. With sincere condolences, my prayers go out to the Vita Family.

Mark and Kim Pacheco and family

Posted Jun 09, 2019 at 06:21pm
To Dee,Theresa, Maria, Joe & family-Our hearts go out to you at this time. Bill was such a good man. We have many nice memories of years gone by. God bless-Love -Kim&Mark

Mark and Kim Pacheco and family purchased the Love's Journey for the family of William Vita, Jr.. Send Flowers

Posted Jun 08, 2019 at 11:51pm
Bill was a special gift of God's love to his family and to everyone blessed to know him.
May God bless your grief as richly as He blessed you in Bill's life.
Comment Share
Share via: 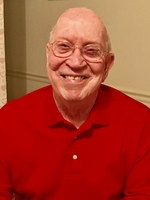