To share your memory on the wall of William Fraser, sign in using one of the following options:

Posted Jan 10, 2020 at 10:52am
It is with regret that I write this note. Bill was a good guy all the way back to AHS. He was my Captain in Cadets.
A hard working guy who took care of his family and especially my friend Rosemary.
I know he is a better place to make the time pass he quizzing everyone about Trivia as he looks down on our world .
Peace ,Love, Gods guidance as his family deals with the loss of there husband and Father

Posted Jan 09, 2020 at 04:27pm
My sincere condolences to your family on your loss. Bill and I worked together in the 90's. He was great to work with and such a character. Bill Allmon
Comment Share
Share via:
HM

Posted Jan 09, 2020 at 09:23am
Harvey and I offer our sincere condolences to Pops family and friends. Harvey’s first experience of Pop and Twig’s generosity was when they invited him to their family Christmas celebration in 2010 knowing that he was new to the Annapolis area and all alone. He was welcomed into their home like he had always been a part of the family. We always jokingly say that Pops friendly and outgoing nature was responsible for our meeting in Ocean City , MD and our subsequent marriage just a few years later. We’ll always treasure our memories of Pops.
Comment Share
Share via:
AF

Posted Jan 06, 2020 at 03:23pm
Our thoughts and prayers during this most difficult time. I'm truly so sorry for your loss. Mr. Fraser always made me laugh and treated me like family.
Comment Share
Share via: 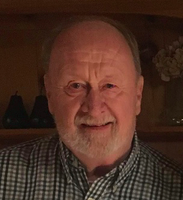