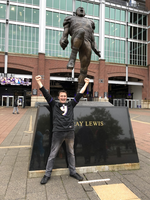 On Tuesday July 16, 2019 Voron Xarya, loving husband and partner, and father of one child, passed away at the age of 45.

Voron, aka John Erich Langsdorf, was born September 20, 1973 in Manassas VA to John and Bonnie (Miller) Langsdorf. He attended the Air Force Academy and went on to work in litigation support. Voron was a member of the Ordo Templi Orientus and practiced Thelema. He attended mass of the Gnostic Catholic Church at William Blake Lodge in Baltimore MD.

Voron had many passions, among them astrology, vexillology, anime, occultism and symbology, kayaking, foreign language, and a wide variety of many other interests. He was part of the DC Goth/Industrial/freak scene and attended the SCA event Pennsic as a member of both Die Fledermaus and Kindermaus. He touched many lives across many social groups and will be dearly missed by friends, family, and chosen family.

A wake and reception will follow at the residence of Billy & Ashley Madero, 1908 Rainbow Dr. Silver Spring MD, 20905. (Burtonsville/Cloverly)

All are welcome to attend.