To share your memory on the wall of Virginia Windsor, sign in using one of the following options:

Provide comfort for the family of Virginia Windsor with a meaningful gesture of sympathy.

Print
Virginia Lee Windsor, “Ginny”, 94, a longtime resident of Deale, MD, passed away unexpectedly on March 29, 2020 at the Univ. of MD Shore Medical Center in Easton.

Ginny was born on May 21, 1925 in Annapolis, MD to the late Andrew and... Read More
Virginia Lee Windsor, “Ginny”, 94, a longtime resident of Deale, MD, passed away unexpectedly on March 29, 2020 at the Univ. of MD Shore Medical Center in Easton.

Ginny was born on May 21, 1925 in Annapolis, MD to the late Andrew and Bertha Musterman. She was a graduate of St. Mary’s High School in Annapolis. As a young woman she worked as a Supervisor of the C&P Telephone Co. In later life she worked as a file clerk for Quaker State. Mostly, Ginny was a homemaker and a stay-at-home mom, raising her two daughters, planting flowers in her garden and painting crafts. She enjoyed reading, drawing and listening to music, and when able to, traveling. She was known to take belly dance lessons and liked to take walks.

Ginny thrived helping people and always put others' needs before her own. She enjoyed social luncheons with her friends and family gatherings. Raised Catholic, she later became a member of Cedar Grove UM Church in Deale, MD.

In addition to her parents, Ginny was preceded in death by her husband, Marshall Windsor. She is survived by her two daughters; Marcy Windsor of Annapolis and Linda Blum of Henderson, MD. She is also survived by her grandchildren: Andrea Harris of Littlestown, PA, Jason Kautz of Edgewater, MD, Lindsey Blum of Mountain Grove, MO and her 5 great-grandchildren.


A celebration of Ginny's life will take place at a later date. Please take a moment and leave a condolence for her family by using the memory wall tab on this page.
Read Less

Receive notifications about information and event scheduling for Virginia

We encourage you to share your most beloved memories of Virginia here, so that the family and other loved ones can always see it. You can upload cherished photographs, or share your favorite stories, and can even comment on those shared by others.

Posted Apr 08, 2020 at 03:42pm
Although I called her Mrs. Windsor until I grew up, Ginny was totally the fun mom in the neighborhood. She reminded me so much of Lucille Ball, always doing something funny without even trying. One time she answered the door with a sugar daddy pop in her mouth and as the pulled it out, her teeth came out with it. Another time we were playing in the stairway and Marsha was acting up, she went to smack Marsha on the thigh, and missed and got me instead. I was never aloud to do anything as a child, (over protective mother) and she talked her into letting me go to O.C. with them one summer. On my Birthday one year, at my request she made me chocolate chip cookies and her special coleslaw. She gave me the recipe but I haven't made it for years. I'll have to make some after we get settled after our move.
Comment Share
Share via: 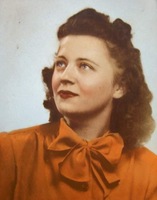