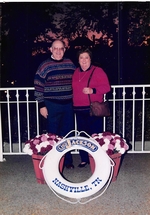 Thomas "Tom" Edward Collison, IV departed this life at the Anne Arundel Medical Center on Saturday, May 30, 2020. Thomas was born to the late Thomas Edward Collison, III and Eleanor Leitch Collison on November 3, 1939. He was the oldest of 6 children, living his youth at their home up the hill from Collison Corner.

Tom was a graduate of Annapolis High School, the class of 1957. After serving in the U.S. Army from 1960 to 1964, he was employed by the J.F. Johnson Lumber Co. for over 35 years. Tom then went on to work for Adams Automotive where he worked until his death. He was very active in the Anne Arundel County Fair, where he served as Vice President for many years. Tom was an instrumental member and judge at the Horse Pulling competitions and a coach for pony league baseball for the Mayo Athletic Association.

In addition to his parents, Tom was preceded in death by the love of his life, Anne Nutwell Collison, who left this world only 10 months ago. They were married for almost 52 years. Also preceding him were his brothers, Ronnie, Gary and his little brother, Jeffrey Collison.

He is survived by his brother, Larry Collison and sister, Joan Callender; and many nieces and nephews to cherish his kind and loving spirit.

The Collison and Nutwell families would like to thank the caring, compassionate and expert care his nurses, doctors and hospice staff that took excellent care of Tom during this roller coaster ride of the last weeks of his life. You all really deserve the highest respect for the compassion and patience you showed us all. In this time when no one could visit the hospital, our many calls to his nurses and calls received from his doctors and doctors assistant were so deeply appreciated by our family.

Tom was a loving, caring, kind man. He believed that everybody in this world deserved kindness and respect. He loved to read and could talk to you on most any subject. He was constantly learning and broadening his education.

A graveside service for immediate family only will be held on Wednesday, June 3, 2020 when Tom will be laid to rest beside his beloved Anne in Woodfield Cemetery, Galesville, MD. Online condolences may be made at by clicking on the memory tab.

In lieu of flowers donations may be made to: Anne Arundel County Fair , P.O. Box 372, Crownsville, MD 21032, reference to the Junior Fairboard members. Tom would be elated if you feel inclined to do so, as he supported that division of our upcoming fair boards future.