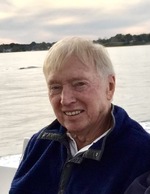 Ronald Thomas Faulkner, 82, passed away peacefully, at his home, surrounded by family on Sunday, January 3, 2021. He was a resident of Annapolis, MD for twenty-five years and previously of Ft. Washington, MD. He was born on December 18, 1938 in Providence, RI, the son of the late Robert and Dorothy Faulkner. Ron served in the US Navy as a Gunner’s Mate on the USS Abbott. He began working as a baggage handler at Alleghany Airlines, now US Airways, and retired as a Captain (piloting the BAC 1-11 and DC-9) in 1993 after 28 years. Upon retiring, he was a businessman, owning sixteen childcare centers around Maryland with the support of long-time friend, Linda Brooks. The smiling faces of children fueled his love of the business. Ron was a mentor and a friend to many.

Once retired from his childcare business, Ron was devoted to his grandchildren near and far, becoming a fixture on every sideline of their sporting events in rain, snow or blazing sun. He was an incredibly proud grandpa of each of them as they grew into young adults. Ron was the life of the party, hosting years of Parade of Lights get-togethers. He lived life to the absolute fullest and was a regular in the local establishments and walking around Eastport and downtown Annapolis. He enjoyed bicycling, boating, traveling with friends, the Nationals and the Washington Redskins. His presence was always near. It's such a profound loss to those who knew and loved him. Ron left a void and a lasting legacy for each of us to carry on.

He is survived by his children, Ronald Lee (Dawn) of Bluffton, SC, Thomas Alan (Danielle) of Annapolis, MD, Julie Ann of Bradenton, FL and Tammy Ellen (Andy) of Smithfield, VA; his sister, Elaine Gray of Wellesley MA; his grandchildren, Bobby, Gavin, Melissa, Grace and Emma Faulkner, Marissa Parker and Christine Faulkner-Roth and 4 great-grandchildren. Ron is predeceased by his brother Robert Faulkner and his sister Dorothy Mason. A private family memorial service is planned.

Memories and condolences may be shared online using the Memory Wall tab above.