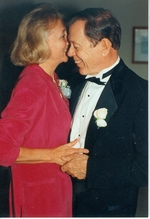 Mr. Pickens and his twin brother, Richard Dee, were born December 29, 1933, in Clarksburg, WV to the late Fannie (Perkins) and Eustace Hill Pickens.

He served in the U.S. Army and attended Marshall University earning a Bachelors of Science degree. He worked in sales and marketing at Proctor & Gamble and later for Johnson & Johnson.

Mr. Pickens came to reside in Bowie, MD with his wife, Movita. He worked in real estate at PGP Realty and later started his own real estate company, Sun Coast Realty. He earned his Juris Doctorate degree in Law from the University of Baltimore and worked as a criminal defense Panel Attorney in Washington, DC. In 1978, he moved to Davidsonville, MD.

Mr. Pickens was an avid Marshall University fan and supporter. He enjoyed living near the water and spending time with family and friends. He especially liked watching his children and grandchildren participate in sporting events and other activities.

Friends are invited to celebrate Roger's life at the Kalas Funeral Home & Crematory, 2973 Solomons Island Rd., Edgewater, MD on Tuesday, July 30, 2019, from 1 pm until his memorial service at 3 pm. In lieu of flowers, memorial contributions may be made to the Marshall University Scholarship Fund: Big Green, P.O. Box 1360, Huntington, WV 25715.

Condolences and tributes maybe made by using the link on this page,