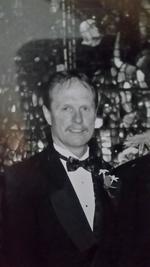 Robert Edward Donaldson "Bob", 76, a 49 year resident of Edgewater, MD and previously of Hyattsville, MD, passed away on June 18, 2019 at his home, surrounded by his family overlooking the South River with the sun shining through the window, after a lengthy and courageous battle with cancer. Born on November 11, 1942 in Hyattsville, MD to the late Mary Froman Donaldson and Edward Waters Donaldson, Bob graduated from Northwestern High School in 1961. He served in the United States Army Airborne Division as a paratrooper and Military Police Officer stationed at Fort Meade and was honorably discharged in 1967. His career was as an IBEW Local 26 Union Electrician for more than 40 years. In 1973 he and his wife, Joan purchased mountain-top land in West Virginia, where he built a beautiful cabin, "Starwood", overlooking the valley. There were countless memories made there with extended family and friends. An avid car enthusiast, Bob owned and restored many classic cars. He was President of the local car club, Wheels From The Past, where he gained many meaningful friendships. Bob was a positive and influential role model as a husband, father, mentor, and friend. Bob's family meant everything to him and he loved nothing more than spending time with his wife and his son's families. He leaves behind a legacy of integrity and will be greatly missed by all who were fortunate to have known him. In addition to his parents, Bob was preceded in death by his brother, Steven Donaldson. He leaves behind his wife of 53 years, Joan Hansen Donaldson; two sons, Matthew(Alison) and Todd (Diane) Donaldson; four devoted grandchildren, Shane, Emma, Logan, and Camryn; three siblings, Lynn (Chuck) Kuhn, Robin (Steve) Whitman and Tim (Sheila) Donaldson; three step-siblings, Christine (Jerry) Hall, Bill (Cynthia) and Steve Hansen: his loving step-mother, Bette Donaldson and many dear nieces, nephews and friends. Friends and family are invited to celebrate Bob's life at the Kalas Funeral Home & Crematory, 2973 Solomons Island Rd., Edgewater, MD on Thursday from 2 to 4 and 6 to 8 pm where his service will be held on Friday, June 21 at 11 am. Interment will be private. Contributions may be made to Wounded Warrior Project, PO Box 758517, Topeka, Kansas 66675 or St. Jude Children's Research Hospital, 501 St. Jude Place, Memphis, TN 38105. Condolences may be made by clicking the Memory Wall link on this page.