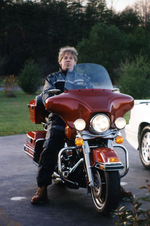 Robert Lee “Hacksaw” Cranston, 65, a resident of Edgewater, MD died of cancer on Monday, November 23 at his home surrounded by his family. Born on July 18, 1955 in Washington, DC to the late Grace Virginia Amick and William H. Cranston, Sr., Robert was a mechanic for 35 years at the Naval Research Lab. He enjoyed music, stereos, traveling, motorcycles, golf, his recovery family and being sober for 33 years. Robert is survived by his siblings, William H. Cranston, Jr., Mark A. Cranston, Genny Callegari and Ellen Rostad; his nieces and nephews, Joseph and Christine Callegari, Amber (Tim) Mortimer, Petra (Robert), Kirstin (James), William and Mark Cranston, Jr.; his great nieces and great nephews, Mikey Penn, Joey Callegari and Mariah (Pierce) Everson; his great-great niece and great-great nephews, Aleigha Everson, William Cranston, Jr. and Oliver Callegari. In addition to his parents, he was also preceded in death by his brothers in law, Frank Callegari and Bernardo Rostad and his kitties, Angel and Devil Kitty. A memorial service will be held at a later date. In lieu of flowers, contributions may be made to the Hospice of the Chesapeake, 90 Ritchie Hwy., Pasadena, MD 21122. Condolences may be made by using the Memory Wall tab on this page.