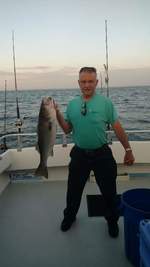 On July 14th, 2019 Ricky B. Talkington, 64, of Fort Washington, MD passed away. Rick was born on May 25, 1955 in Washington D.C. and was the youngest of three children born to late Robert Talkington and Charlotte Moneymaker.
In his early childhood Rick had an affinity towards mechanics. After school, Rick would continue his passion for engineering by working for METRO as an HVAC Mechanic. He retired in 2017 after 38 years of service. Rick was married to the love of his life Carol (Foltz) Talkington for 39 years. Together they had one son, Robert B. Talkington of Bryans Road, MD. Rick was also the step father to Carol’s five children of which he would enjoy family gatherings.
Rick was a hard worker, but it was the simple things in life that gave him the greatest pleasure. In his spare time Rick could be seen tinkering in his tool shed, building windmills, or tending to his garden which he took great care and pride in. He enjoyed fishing on the Chesapeake every year with his friend Todd Johnston and favorite boys Robert Talkington and Chris Lesefske.
His family will miss his stories and appreciation for home cooked meals. Robert and his wife have six children who treasured their “Papaw” dearly. Their fondest memories with Rick are the visits to the family home, picking tomatoes and vegetables from the garden, and swinging on the playset that Rick and Carol maintained just for those occasions.
Rick is survived by his Wife, Carol Talkington, and children Robert Talkington (Michelle Talkington), Randy Heiston, Zurich Heiston, Rhonda Heiston, Rod Heiston, and Royce Heiston, He also leaves behind Chris Lesefske and grandchildren Alorah, Kaleb, Braiden, Dillon, McKenzie, and Riley. He will be missed by his two nieces and nephew. Rick was preceded in death by his parents and two siblings.
Services for Ricky Talkington will be held on Monday, July 22, 2019 at 11 am, with the closed viewing beginning at 10 am. Memorial services will be located at Grace Gospel Worship Center on 5819 Kirby Road, Clinton, MD 20735. Interment will directly follow at Trinity Memorial Gardens in Waldorf, MD.