To share your memory on the wall of Richard Ednock, sign in using one of the following options:

Provide comfort for the family of Richard Ednock with a meaningful gesture of sympathy.

In addition to his parents, Dick was preceded in death by a son, Richard John Ednock, Jr.

Friends are invited to celebrate Dick's life on Wednesday, May 22 from 10:30 am until his funeral service begins at 11:30 am at the Kalas Funeral Home & Crematory, 2973 Solomons Island Rd., Edgewater, MD. Interment Maryland Veterans Cemetery, Crownsville.

Online condolences and tributes can be made by using the link on this page.
Read Less

Receive notifications about information and event scheduling for Richard

We encourage you to share your most beloved memories of Richard here, so that the family and other loved ones can always see it. You can upload cherished photographs, or share your favorite stories, and can even comment on those shared by others.

Posted May 21, 2019 at 10:31am
My deepest condolences on the loss of your dear loved one. Please take solace in the fact that it is possible to see your loved one again. May the god of comfort be with you in this difficult time. 2 Corinthians 1:3
Comment Share
Share via:
HS

Flowers were purchased for the family of Richard Ednock. Send Flowers 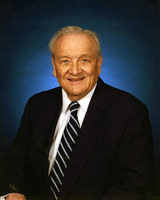