To share your memory on the wall of Randall Roe, sign in using one of the following options:

Receive notifications about information and event scheduling for Randall

We encourage you to share your most beloved memories of Randall here, so that the family and other loved ones can always see it. You can upload cherished photographs, or share your favorite stories, and can even comment on those shared by others.

Posted Oct 02, 2019 at 09:47am
I am at a loss for words. I just heard about Greg’s death and want to express my condolences to Sue, Randy and Marlene, and Barbara.
Greg was a very special man and helped me more than he realized when I lost my husband Sandy to cancer 4 years ago. Whatever I needed he was always there for me. Whether putting salt in my water softener or just there to talk.
He called me out of the blue a couple months ago to say hi and check on how I was doing since my move to Delaware.
The world lost a fine compassionate man in the death of Greg.
Comment Share
Share via:
KC

Posted Sep 25, 2019 at 08:43am
We are at a loss for words for your loss. We Love you Guys. I didn't see Greg that often, those times i Idid my mind goes to, the twinkle in his eyes, and that mischievous smile, Who Me? Ken & Anita
Comment Share
Share via:
SC

I just heard about this and Randy and Marline I send my deepest condolences to you . I have know you all for years and I am shocked and saddened by the news about Greg
LK

Posted Sep 24, 2019 at 09:47pm
Although we haven’t seen each other for a few years, “Uncle” Greg was an almost constant figure during my childhood. I remember how my sisters and I used to try and steal his quarters when he would come over to play poker with our parents. One night he got revenge and scared the pants off us by jumping off the roof onto the deck with a roar just as we were sneaking out the back door with his quarters. I also remember the fun we had going for rides in the rumble seat of his classic car and how the sound of the ahhh-oooga horn made us laugh. I loved visiting his beautiful house on the water and it was a treat for my sisters and I to sleep in his king size water bed when my parents visit lasted past bedtime. I am sad that I won’t get to see Uncle Greg again, but I will cherish the happy memories I have of him always.
Comment Share
Share via:
KC

Posted Sep 22, 2019 at 12:44pm
Randy and Marlene, words are never enough when such a sudden and unexpected death occurs of a loved one. Knowing how much you both will be missing him breaks my heart. Gladden your aching heart by knowing there was no suffering involved...He just went to sleep. Grieving is part of losing someone and it must happen. I know he lived a love filled lifetime with all of you and for that be ever grateful. I’m praying for you and all of those that loved him. Judy McKevitt (Mrs. James D. “Mike” McKevitt) 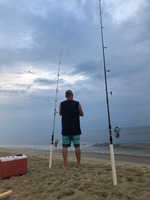