To share your memory on the wall of Phillip Warren, sign in using one of the following options:

Phillip graduated from McKinley Tech High School in Washington, DC, in 1963 and from there attended District of Columbia Teachers College, where he studied physical education and was a standout player on the men’s basketball team. He was drafted into the military with the U.S. Army in 1970 and served as an intelligence analyst and substance abuse counselor until 1973. He served in the Vietnam War in Bien Hoa from 1971 to 1972.

Before and after the war, Phillip worked as a counselor at Edgemeade Residential Psychiatric Treatments Center in Upper Marlboro, MD and later, as a program director at Renaissance Group Home in Bowie, MD. In his life, he held several other positions, but the one he thought was the most fun was truck driver!

Phillip was a man of faith whose family was deeply woven into the fabric of the First Baptist Church of Deanwood, in Washington, DC and then Mt. Ephraim Baptist Church in Kettering, MD. In his later years, he joined Unity Presbyterian Church in Temple Hills, MD, becoming very active and serving as an elder in the church.

Cape May, NJ held a very special place in Phillip’s heart. He liked to go every summer and whenever else he had a few days free. He used to say that he went there to have his clock rewound. There was something grand about escaping on to the ferry and arriving at this quiet Victorian seaside resort town. He made sure that he taught his daughter to love it too!

He is preceded in death by his sister, Donna Marie Warren, and longtime companion, Karen Foley.

A memorial service is being planned for a later date.

You may leave a condolence for his family by using the tab on this page.
Read Less

We encourage you to share your most beloved memories of Phillip here, so that the family and other loved ones can always see it. You can upload cherished photographs, or share your favorite stories, and can even comment on those shared by others.

Plant a Tree in Memory of Phillip
Plant a tree 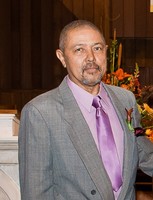