To share your memory on the wall of Nympha Ricasata, sign in using one of the following options:

Provide comfort for the family of Nympha Ricasata with a meaningful gesture of sympathy.

Print
Nympha Amparo Equio Briones Ricasata, 75, passed away on October 2, 2019. Born on May 2, 1944 to the late Enrique Briones and Zosima Equio Briones in Amlan, Negros Oriental in the Philippines.

Nympha graduated with a Bachelor of Scienc... Read More
Nympha Amparo Equio Briones Ricasata, 75, passed away on October 2, 2019. Born on May 2, 1944 to the late Enrique Briones and Zosima Equio Briones in Amlan, Negros Oriental in the Philippines.

Nympha graduated with a Bachelor of Science in Foreign Service from the Lyceum of the Philippines on June 2, 1965. She moved to the United States and married Teofisto C. Ricasata on July 13, 1971 at the Naval Station Chapel in Charleston, South Carolina. They were married for 28 years until his untimely death on December 7, 1999.

Nympha had worked and retired from the Gelman Management Company. Afterwards, she enjoyed traveling with family and friends, playing mahjong, shopping, and watching sports and news.

Receive notifications about information and event scheduling for Nympha

We encourage you to share your most beloved memories of Nympha here, so that the family and other loved ones can always see it. You can upload cherished photographs, or share your favorite stories, and can even comment on those shared by others.

The Galloway Family sent flowers to the family of Nympha Briones Ricasata.
Show you care by sending flowers

Blooming Garden Basket was purchased for the family of Nympha Ricasata. Send Flowers

Posted Oct 10, 2019 at 10:20am
Wishing you peace to bring comfort, courage to face the days ahead and loving memories to forever hold in your hearts. We are thinking of you.

The Galloway Family purchased flowers for the family of Nympha Ricasata. Send Flowers

Flowers were purchased for the family of Nympha Ricasata. Send Flowers 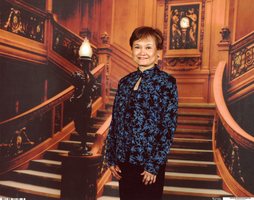