To share your memory on the wall of Mary Cantin, sign in using one of the following options:

We encourage you to share your most beloved memories of Mary here, so that the family and other loved ones can always see it. You can upload cherished photographs, or share your favorite stories, and can even comment on those shared by others.

Posted Mar 29, 2020 at 01:03pm
Patricia and I will miss Jane, she was a caring community member and friend to all her neighbors.
Comment Share
Share via:
CW

I'm so sorry to learn of the passing of your mother. I'm sending you thoughts and prayers. May her precious memories keep you at peace during this time.

Posted Mar 25, 2020 at 07:02pm
To the family - although it’s been some time since I had the opportunity to be in your and your moms company your family has always been in my thoughts and heart
Please accept my condolences for the loss of Jane
Please keep me in mind if you decide to hold an open memorial in the future
Fondly,
Doug Fach
Comment Share
Share via:
LN

Posted Mar 25, 2020 at 05:05pm
So sorry to hear the news of her passing. Our thoughts are with you all and we wish we could be there to bring comfort at this time. I'm glad we got to see her the last time we were over there.

So sorry for your loss, just know you are in our thoughts and prayers 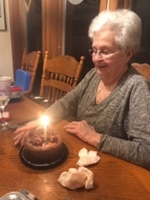