To share your memory on the wall of Mark Wagner, sign in using one of the following options:

Provide comfort for the family of Mark Wagner with a meaningful gesture of sympathy.

Receive notifications about information and event scheduling for Mark

Posted Apr 19, 2020 at 02:47pm
We are so sorry to hear of Mark's passing. Since November of 2016 Mark has stayed at our house to watch our pups when we would go out of town. He was such a gentle soul. We will all miss him! Jean & Paul Richards, and Bode & Solo.
Comment Share
Share via:
KG

Posted Apr 15, 2020 at 02:30pm
Mark was a good friend and co-worker, and I loved that he was best buds with my dog, Lizzy. My heart goes out to his family and girlfriend. Rest in peace Mark. I'm going to miss you very much.
Comment Share
Share via:
DT

Posted Apr 15, 2020 at 12:04pm
I'm so very sorry to hear of Mark's passing. I worked with Mark at Weems & Plath. He was a joy to have as a co-worker: humorous, capable, hard-working. I know he will be missed. May the Lord comfort his friends and family during this difficult time. He is in a place where there is no pain, but eternal life. Sail on, Mark! We'll keep the watch.
Comment Share
Share via:
PN

Posted Apr 13, 2020 at 09:14pm
Oh Susan (and Andy and Mrs. Wagner), I am so shocked and sorry to hear about Mark. I remember him as so handsome and funny and generous. My brother told me about Mark this morning, because this news made it to some ALHS facebook page. Strength to you for this journey. Grace and peace, Patti Nussle
Comment Share
Share via: 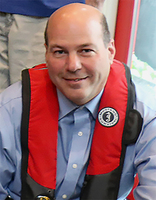