To share your memory on the wall of Mark Lay, sign in using one of the following options:

Provide comfort for the family of Mark Lay with a meaningful gesture of sympathy.

Susan Kreiner Warthen, The Jerew Family, and others have sent flowers to the family of Mark James Lay.
Show you care by sending flowers

Posted Oct 28, 2019 at 11:41am
Mark will be missed by all his neighbors but mostly me. We would sit on each of our porch’s and talk all the time. It was also away that I would check on him and him on me. Last Christmas a group of us decided we wanted to decorate our homes, so Mark and George (another neighbor) got out all my Christmas decorations and lit up our court. It won’t be the same this year. Mark you will be missed. Ashley and family my prayers go out to all of you.
Comment Share
Share via:
TF

The Jerew Family purchased the Serenity Wreath for the family of Mark Lay. Send Flowers

Posted Oct 27, 2019 at 08:38am
Our thoughts and prayers are with your entire family during this very difficult time. May God be with you all. Love, Kipp, Michelle & Kiandra. 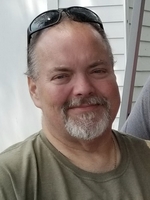