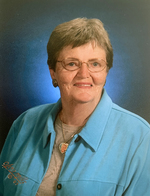 Margaret Richey Arrington (Nee Meredith), a resident of Edgewater MD for over 65 years passed away on July 23, 2019. She was born on October 6, 1930, in Washington DC to the late Aaron A. and Elsie Hall Meredith.

Growing up in Washington DC, she graduated from McKinley Technical High School in 1948. After High School, she worked in the Accounting Division at the National Geographic Society. She married Howard
“Reds” Arrington the same year on November 6th. They moved to Selby on the Bay where they raised their three daughters; Donna Clay of Greensboro, Bonnie Pellicot of Edgewater, and Sherri Hennen of Mayo.

Margaret was a neighborhood correspondent for the Evening Capital Newspaper from 1956 to 1967, worked as an assistant in the office of Dr. Sylvia M. Lim, and retired from the YMCA Camp Letts as the office manager.

She was proud of her ties to Washington, DC. Her grandfather was appointed Director of the Bureau of Engraving and Printing by President Harrison and President McKinley making him the only person to serve as Director twice. Her husband (d.2007) was employed at the White House during the Truman to Carter Administrations. She and Reds were invited by the Presidents to attend many White House events. Margaret documented each occasion with photographs, detailed writing, and scores of souvenirs and gifts that she proudly displayed.

A dream came true for Margaret when her written stories were accepted for publication in “The Anthology of Original Work, District Lines”, Volume I and II. She spent countless hours researching, creating, and maintaining family tree information. In a story she penned titled, “My Cousins”, she wrote that she had 59 first cousins (she knew and spent time with most of them), 150 first cousins, once removed, 280 second cousins, and 176 third cousins. She ended the story with, “Not bad for an only child.”

She was Mimi to seven grandchildren; Jesse, Carrie, Travis, Tyler, Russ, Meredith, and Jacklyn, eleven great-grandchildren; Skye, Leah, Michael, Marin, Remy, Raylyn, Calen, Scotty, Gabe, Isaac, and Wesley who loved her and loved being with her because they knew something interesting and fun was sure to happen. Always up for a new adventure, she never hesitated to say, “Let’s Go!”

Friends may call at the Kalas Funeral Home & Crematory, 2973 Solomons Island Rd., Edgewater, MD on Thursday, August 1, 2019, from 4 to 7 pm. The family will receive guests at Mayo United Methodist Church, 1005 Old Turkey Point Rd., Edgewater MD on Friday, August 2, 2019, from 9:30 am until her memorial service begins at 10:00 am. In lieu of flowers, memorial contributions may be made to Mayo United Methodist Church.

Online guestbook available by visiting the link on this page.