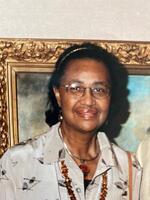 She was a woman regal, royal and rare, with non-negotiable dignity.” ~ Anonymous

Emma “Louise” Gregory, a longtime Anne Arundel County resident whose talent and passion for homemaking and hostessing turned gatherings large and small with family and friends into splendid and memorable affairs, passed away peacefully on December 29, 2020, from complications of Covid-19 at the age of 90.

Known by her middle name, Louise was born on February 23, 1930, in High Point, NC, to Isabell (nee Talley) and Charles A. McDonnell, who became successful business owners in their hometown of Cheraw, SC. Louise was the second of three children, and from a young age demonstrated the creativity, flair and style that would become her hallmark.

She was educated at Coulter Memorial Academy, established in 1881 by the Presbyterian Church USA as the first school in Chesterfield County to serve African American children, and went on to graduate from Harbison Junior College in Irmo, SC.

Louise, along with her older brother, Sonny, and younger sister, Henrietta, grew up helping in the family businesses, first in her father’s dry cleaning and tailoring business and then in her mother’s homestyle restaurant.

After Harbison, she moved to Washington, DC, to live with an aunt and study to be a dental hygienist, after which she worked for many years in the practice of prominent Washingtonian and African American dentist Dr. Alphonso Overstreet. For more than 20 years, she worked as a supervisor of proofreading in the Department of Legislative Services for the Maryland General Assembly, from which she retired.

It was in Washington that she met the love of her life and husband of 58 years, Harry Jackson Gregory. The doting couple married on June 27, 1957, delighting friends who often joked about Harry being a confirmed bachelor until he met Louise. They were blessed with a daughter, Tylade Elizabeth, and built a life that focused on family and country and coastal living. Together, they raised bulldogs, remodeled a beach house, and designed and built their dream home amid the sprawling horse farms of Anne Arundel County. Louise was a proud and active parent at equestrian competitions with her daughter, a champion dressage rider, and sponsored cadets at the U.S. Naval Academy for several years.

A fashion plate and clothes lover, Louise was an extraordinary seamstress and impeccable dresser who was ahead of her time, making most of her clothing until she began working for the Maryland General Assembly. Her wardrobe and accessories were always striking and defied convention, and she could construct head-turning garments the night before the next day’s outing -- be it to the office or a special ocassion.

She prized being polished, elegant and stylish in all that she did, including interior decorating, gardening, and luncheons or holiday dinners for family and friends. Louise was a consummate chef, baker and hostess, and her summer afternoon lawn parties at her Davidsonville home were not be to missed.

Louise is survived by her daughter, Tylade Kolasa, and son-in-law, Daniel Kolasa, three grandchildren, William, Sierra and Kendall; a sister, Henrietta Motley and her husband, Charles Motley, a sister-in-law and a host of loving nieces and nephews. She was predeceased by her husband.

Due to COVID-19, no gathering will be held at this time. The family wishes for everyone to enjoy and share fond memories by signing the online guestbook or sending condolences to the family at the address below. She will be interred with her husband at Arlington National Cemetery later this year.


Condolences can be sent to:

In lieu of flowers, contributions may be made to the Alzheimer's Association, 1850 York Road, Suite D, Timonium, MD 21093 (www.alz.org)