To share your memory on the wall of Kevin Zinn, sign in using one of the following options:

Provide comfort for the family of Kevin Zinn with a meaningful gesture of sympathy.

Kevin was born in Washington, D.C., on April 16, 1963 to Donald Edward Zinn, Sr. and Robbie Jan Zinn. He grew up in Annapolis, Maryland, graduating with Annapolis High School’s Class of 1981.
He later earned his bachelor’s degree in history from Franklin and Marshall College in Lancaster, Pennsylvania, where he also played varsity lacrosse.

Before completing his degree, Kevin spent several years in Paris indulging his love of French culture, language and food. He supported himself by working for a pastry chef and learned the secrets of baking French baguettes, croissants and pastries.

After several years on the East Coast, Kevin joined his family when they relocated to Park City, Utah. He lived there for the next 18 years before recently returning to Annapolis.

Kevin had a passion for the outdoors shaped by his early years in Annapolis where he learned to sail, ski and hunt with his father and two brothers. He loved the water, the mountains and the open skies and he channeled that passion into a fulfilling livelihood as a certified fly fishing guide, leading expeditions to Northern Utah’s Flaming Gorge and Green River in Jackson Hole, Wyoming.

Kevin was also a true man of faith. He was a member of the New Life Center of West Valley, in West Valley, Utah, and most recently rejoined the Antioch West Apostolic Church in Crofton, Maryland. He loved his faith communities and all of its members. He also lived his faith, always helping and caring for others.

In addition to his mother, survivors include his brothers, Donald Edward Zinn, Jr., of Richland, Michigan, and David Estridge Zinn and his wife Corinne Cornet-Zinn of Park City, Utah; his niece Rylee Alta Zinn, and nephew Teegan Thayer Zinn, both of Tooele, Utah; and his closest companion, Katherine Brady McMillan of Annapolis. His father died in 2006.

In lieu of flowers, contributions in Kevin’s name to the Stanton Community Center, 92 West Washington Street, Annapolis, MD 21401 would be appreciated.

A celebration of Kevin’s life will be announced at a later date.

Receive notifications about information and event scheduling for Kevin Zinn

We encourage you to share your most beloved memories of Kevin Zinn here, so that the family and other loved ones can always see it. You can upload cherished photographs, or share your favorite stories, and can even comment on those shared by others.

Posted Apr 26, 2020 at 01:27pm
I am so sad that Kevin was taken home. It had been a few years since we last saw each other. I could not play tennis, which he knew. We could both sail and spent hour, days and years sailing on GOLDFISH. I tried to teach him how to swing dance (probably at a regatta party) He tried, he was very enthusiastic and eventually we landed in a pile on the ground, laughing so hard. We were crying. Kevin, Donald and David always treated me like a sister since we were kids and I will miss him so much.
Comment Share
Share via:
HT

Posted Apr 26, 2020 at 11:18am
We are truly saddened to hear of Kevin's passing. Seeing Kevin's smile in November at Angler's was a blessing and he will be missed by all who knew him. Kevin was truly a great man and knowing him brings a smile to my face, as he always had one on his. Our deepest condolences. Go with God Kevin and God bless you guys.
Hunter and Kathie Taylor
Comment Share
Share via: 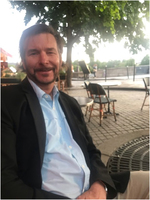