To share your memory on the wall of Juanita Anderson, sign in using one of the following options:

Lucille was born in Monongah, West Virginia to Emma and Dewey S. Herron. She attended Fairmon... Read More
Annapolis – Juanita Lucille Anderson died suddenly on July 9, 2020. Born April 12, 1932, Lucille, as she was known to most, was 88 years old.

Lucille was born in Monongah, West Virginia to Emma and Dewey S. Herron. She attended Fairmont State Teacher’s College and obtained a bachelor’s degree and eventually earned her master’s degree. In 1954, she obtained a teaching position at Glen Burnie High School. Lucille taught home economics at Bates Junior High School in Annapolis for most of her teaching career. Lucille retired from teaching in 1992.

Lucille was a member of Calvery United Methodist Church. In addition, Lucille was a member and Past President of the Ladies of the Elks, Annapolis Lodge #622. Lucille was a highly active member of the Annapolis Chapter #46, Order of the Eastern Star, where she served as Worthy Matron on six occasions. She also served as the Deputy Grand Lecturer of the Grand Chapter of Maryland for many years. She enjoyed and treasured the many friendships and experiences as a result of her service.

Lucille married Samuel W. Anderson, Jr. on May 30, 1957 and they spent 63 wonderful years together. Subsequent to her retirement, Lucille and Sam became frequent travelers, both in the United States and abroad. She especially enjoyed the unscripted car trips throughout all of Continental Europe, England and Scotland. These trips allowed for spur of the moment changes and chance encounters that often led to amazing experiences. One of Lucille’s favorite and most memorable was a Christmas Day flight to Iceland, then on to Luxembourg and a sixteen day driving tour that included New Year’s Eve in Vienna, dining in a small French restaurant and walking the streets of Vienna with their new found Viennese friends. This was followed by attending the Boys’ Choir Mass and Vienna Philharmonic Symphony on New Year’s Day. This particular trip included a visit to the Chapel where “Silent Night” was written and a walk around the top of the city walls of Rothenberg, Germany. Lucille and Sam also enjoyed many cruises including the Caribbean and Hawaiian Islands. Other favorites included Mexico and cruising on the Mississippi River from New Orleans.
Lucille and Sam also enjoyed visiting casinos and often visited Atlantic City, Reno, and Las Vegas. In recent years, most of their casino time was spent at Harrington Raceway and Casino in Harrington, Delaware. As a frequent “flyer” Lucille and Sam were well known to all the casino’s staff and enjoyed seeing all of them. They often received “complimentary” trips to the Bahamas, Florida and Las Vegas and enjoyed attending concerts performed by entertainers such as Kenny Rogers, Jeff Foxworthy, and others.

Most of all, Lucille enjoyed and loved her family above all else. As a home economics teacher, Lucille enjoyed and was an amazing cook. Her fudge and homemade bread are legendary and these recipes will be passed down for generations to come. She especially enjoyed spending Holidays with the family (except when she abandoned her children to go to Europe), family dinners and in the later years, dining out with her family. Lucille was also an avid reader and Ravens fan.

Lucille is survived by her husband, Samuel W. Anderson, Jr., who will miss her beyond the expression of words, and her three children, whom she loved dearly, Emily A. Davidson, Owings Mills, MD, Samuel W. Anderson, III, Easton, MD and Jennifer L. Blose (Robert), Winchester, KY.

Lucille was rarely photographed without an infant in her arms as she is also survived by eight great-grandchildren and one great-great grandchild. Her great-grandchildren include Kaitlyn Andercyk, Colton Anderson, Anthony Malloy, Taylor and Kevin Griffith, Reagan, Samuel, and Lucy Escobosa.

Lucille is also survived by her sister-in-law, Margaret Mary (Peggy) Caldwell and numerous nieces and nephews.

Lucille was preceded in death by her parents and her three sisters and brother.

In lieu of flowers, memorial donations may be made to the American Heart Association, the Wounded Warriors Project, or the charity of your choice.

Online condolences may be offered using the Memory Wall tab at the top of this page.
Read Less

Receive notifications about information and event scheduling for Juanita

We encourage you to share your most beloved memories of Juanita here, so that the family and other loved ones can always see it. You can upload cherished photographs, or share your favorite stories, and can even comment on those shared by others.

With love from Annapolis Chapter No. 46 OES and Diane Herron Furman sent flowers to the family of Juanita Lucille Anderson.
Show you care by sending flowers

Posted Jul 15, 2020 at 12:59pm
I never knew Lucille, but I have been best friends with her son Sam for over 30 years. He obviously comes from a family built on a lot of love and integrity; please accept my deepest condolences for your family's loss. It appears Lucille had a wonderful life.
Comment Share
Share via:
WO

With love from Annapolis Chapter No. 46 OES

Posted Jul 14, 2020 at 08:30pm
In honor of Sister Lucille's dedicated service and unfailing support of the Order of the Eastern Star in Annapolis and in Maryland.

With love from Annapolis Chapter No. 46 OES purchased flowers for the family of Juanita Anderson. Send Flowers

Flowers were purchased for the family of Juanita Anderson. Send Flowers 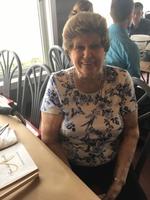