To share your memory on the wall of Joyce Scanlon, sign in using one of the following options:

Haley, Mike and Joanne Mihaly, and other have sent flowers to the family of Joyce P. Scanlon.
Show you care by sending flowers

Posted Aug 16, 2020 at 01:02pm
May your family be comforted by the outpouring of love surrounding you.

Posted Aug 16, 2020 at 12:29pm
Joyce was so smart but above all so generous. Smell popcorn and you knew Joyce was nearby! My heartfelt sympathy goes to John and the family.
Comment Share
Share via:
MM

Mike and Joanne Mihaly purchased flowers and planted a memorial tree for the family of Joyce Scanlon. Send Flowers

Flowers were purchased and a memorial tree planted for the family of Joyce Scanlon. Send Flowers 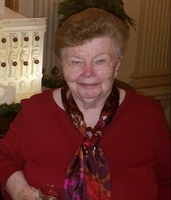