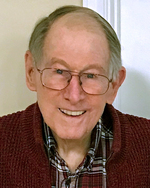 The son of Lawrence and Edith (Yarrington) Tierney, he was born in Springfield, MA, May 31, 1924. A World War II Veteran, he served in the Army Air Corp, attaining the rank of Staff Sergeant.

Following his military service, he began a 40-year career as a Meteorological Technician with the National Oceanic and Atmospheric Administration in the Washington, DC area. He resided in Camp Springs, MD for more than 60 years and recently relocated to Annapolis, MD.He will be remembered for his green thumb, producing the largest tomatoes, most tender lettuce and flower gardens that were the envy of every neighbor. He had a life-long love of baseball that began the year of his birth when the Washington Senators won the 1924 World Series. He spent countless hours at Memorial Stadium and later Camden Yards, rooting for his Baltimore Orioles. He was an avid learner with a natural curiosity as reflected by what can be found on his bookshelves. He enjoyed spending time with family, especially his grandchildren, who brought him much pride and joy. He was a man of deep faith who devoted 60+ years to his parish, St. Philip the Apostle Church in Camp Springs, where he served as an RCIA Leader, was a member of the Holy Name Society and Parish Council and also served as a lector.

Family and friends are invited to celebrate John's life on Saturday, December 12 from 10 am until a Mass of Christian Burial begins at 11 am at St. Phillip the Apostle Catholic Church, 5416 Henderson Way, Camp Springs, MD 20746. Interment at Resurrection Cemetery will be private.

In lieu of flowers, memorial donations can be made in John’s name to Catholic Charities of the Archdiocese of Washington or Charlotte Hall Veterans Home.