To share your memory on the wall of John Dawson, sign in using one of the following options:

Print
John Anthony Dawson, 39, a resident of Annapolis and previously of Maine, Virginia, California and Washington State, passed away at his home on August 14, 2020.

Known to everyone as “Dawson”, he was born on March 11, 1981 in Brunswic... Read More
John Anthony Dawson, 39, a resident of Annapolis and previously of Maine, Virginia, California and Washington State, passed away at his home on August 14, 2020.

Known to everyone as “Dawson”, he was born on March 11, 1981 in Brunswick, Maine. He was a 1999 graduate of Annapolis High School and a 2001 graduate of Anne Arundel Community College and attended Salisbury State University.

Dawson served his country proudly for 8 ½ years in the US Army and retired as an Airborne Infantry Soldier. He completed 2 combat tours in Afghanistan and one in Iraq.

His interests included playing football & lacrosse in high school and college and he loved weightlifting and going to the gym.

Dawson is survived by his mother, Marcia A. Dawson of Annapolis, two brothers; Jason and Michael Dawson, both of Annapolis and one nephew James “Jamie” Dawson.

Family and friends are invited to celebrate Dawson’s life on Monday, August 24, 2020 from 11 am until a funeral service begins at 12 pm at the Kalas Funeral Home & Crematory, 2973 Solomons Island Rd., Edgewater, MD 21037. Internment will follow at Maryland Veterans Cemetery in Crownsville, MD.

In lieu of flowers, memorial contributions may be made to the Wounded Warrior Project, P.O. Box 758516, Topeka, Kansas 66675-8516 or online at woundedwarriorproject.org. Online condolences at KalasFuneralHomes.com
Read Less

Flowers were purchased for the family of John Dawson. Send Flowers

Posted Aug 20, 2020 at 11:39am
Marcie, I am so very sorry for your loss. My thoughts and prayers are with you and your family.
Cathy Lang
JHBMC
Comment Share
Share via: 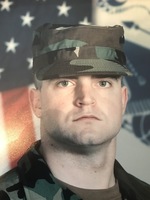