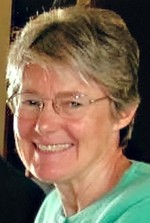 Jeanne passed away after a long and difficult struggle with Multiple System Atrophy, a form of Parkinson’s Disease. She touched many lives through her myriad pursuits, and never failed to impress her friends with the focus and energy she brought to every endeavor. A fearless crusader for cycling, integrated schools and communities, education, anti-smoking, community parks and the preservation of open spaces, she believed that individuals can make the most impact in their own community, and proceeded to do just that after she and her husband, Peter, settled in Oxon Hill in 1967. Informed by faith that we are stewards of God’s creation, she was an early champion of the environmental movement, living in accordance with her ideals and instilling a love of the outdoors and nature in her children. With her husband, she grew her own fruits and vegetables, avoiding pesticides, and eschewed a car for work, commuting the 5 miles to the Naval Research Laboratory on her bicycle for years, rain or shine. Her early advocacy for safe cycling and public hiker-biker trails led her and a few neighbors to establish the Oxon Hill Bicycle and Trail Club in 1972. The club thrives to this day with over 400 members and hundreds of rides each year including the annual century ride (100 miles) in Charles County that attracts about 800 riders each Labor Day.

Jeanne was introduced to synchronized swimming at Mary Washington College. Later she competed in Masters competitions (over age 25), winning medals at national and international competitions. She also completed many long-distance open-water swimming events, like the Chesapeake Bay Bridge Swim. Taking up distance running in her mid-30s, she competed in her first marathon, DC’s Marine Corps Marathon, in 1978. She went on to complete another 35 marathons over the years, including five Boston Marathons, and countless other races at shorter distances. A new sport, the triathlon, became popular in the 1980s that would play to all of her strengths in swimming, biking and running. In spite of contracting cancer and the subsequent removal of her left calf in April of 1984, she qualified in June of the same year for the Ironman Triathlon World Championship in Kona, Hawaii at which she took third place in the 40-44 age group. She returned to the Ironman competition two more times, taking a second in the 45-49 age group in 1988 and winning the 50-54 age group in 1990 after a second surgery to remove a recurrence of the tumor in 1989. She was determined to conquer the disease. Jeanne continued to compete in road races and triathlons right up to the time when first symptoms of the Parkinsonism appeared in 2012.

The daughter of David Wooster Taylor, a Navy fighter pilot, and Virginia Wood Feineman, Jeanne was born in Portsmouth Virginia in 1940, and, like most military families, moved frequently. Her father took part in raids against German-occupied Norway in the early years of WW2 but then was killed tragically in the crash of a fighter plane he was testing off the coast of Rhode Island in 1944. After her father’s death, the family, which now included her brother Dave, moved to California to be near Virginia’s parents. In 1946 Virginia married Daniel Whitfield Thornhill, also a Naval officer. Another brother, Daniel Bruce Thornhill, was born in 1948. After her stepfather returned from the Korean war, the family moved to Virginia where Jeanne attended high school at Washington-Lee in Arlington and Stratford Hall in Danville for her senior year. Jeanne matriculated to Mary Washington College in Fredericksburg, graduating with a BA in a double major of Mathematics and Physics, class of 1961. She began working at the Naval Research Laboratory (NRL), where she met a young Naval Officer and scientist, Peter Ulrich. They were married at The Washington National Cathedral in June of 1963, and the family moved to Boston, where her husband was working towards a PhD in physics at MIT. Their son, Peter, was born in Boston in 1964. Jeanne got a chance to use her considerable mathematical skills at a time when the country was mobilized to put a man on the moon. The MIT Instrumentation Laboratory, now named the Draper Laboratory, was under contract to NASA to develop software for a computer that would guide the Apollo astronauts to the moon. Jeanne was hired to write the software to solve the navigation problem for the Trans-Lunar Injection maneuver utilizing celestial navigation. After the successful completion of the moon flights in 1972, Jeanne was awarded an official commendation, signed by Charles Stark Draper, for her contributions to the Apollo Program. While much of the computation in those days was checked and supported by human “computers” with slide rules, Jeanne was an early pioneer in using digital computers for simulation. When the family returned to the Washington area in 1967, settling in Oxon Hill, she returned to NRL as a programmer on the large mainframe computers there. From the early batch programs stored on punched tape and cards, to the high performance Cray parallel-processing super-computers of the 1980s and 90s, she mastered every new development. In 1969, a daughter Diana Cynthia was born on July 18 as the Apollo 11 spacecraft raced to the moon. Jeanne named her daughter for both the Roman and the Greek goddess of the moon. Two years later, Jeanne returned to NRL to continue her work in software development and computational support services to a wide variety of scientific research projects. She retired from government service in 1995.

She was also a talented, award-winning artist. Her pastel and charcoal portraits faithfully captured not just the likenesses, but also the emotions of her subjects. She produced them at church fairs, art festivals and on commission, largely through word of mouth. Hundreds of lucky families now proudly display a Jeanne Ulrich original in their homes. She was a signature member of the Potomac Valley Watercolorists, The Art League Gallery in Alexandria and The Mattawoman Creek Art Center in Marbury, Maryland.
Not content with her sports and artistic endeavors, Jeanne was also active in her church, St John’s Episcopal, Broad Creek, where she served on the vestry several times and on two Rector Search Committees. Her parties for the choir, on the occasion of church high holy days or after special oratorio performances, were legendary. She was an avid reader of science fiction and mysteries, enjoyed Gilbert and Sullivan performances, and when looking for yet another challenge, you might find her busily translating Newton’s Principia from the Latin or solving the Rubik’s Cube. She was a Cub Scout Den Mother, a Brownie and Girl Scout leader, and tried to instill civic pride in her charges with hands-on activities designed to teach about the history of our region, such as taking them to Smoot Bay, which is now National Harbor, to test water quality, or the time she led a group of scouts through the woods of Oxon Hill Manor to locate and map the Addison family graveyard, where the first president of the United States under the Articles of Confederation, John Hanson, was buried. Her zeal for preserving the historical site led her to oppose several iterations of plans to commercially develop the area, and through her efforts contributed to the delay of construction for nearly 30 years. The old cemetery was ultimately surrounded by a casino, outlet mall and resort. This was a great disappointment to her, and she was relieved that the remains of those buried at the threatened site have since been reinterred at St. John’s.

In late 2012, her health began to decline, and after extensive testing it was determined that she had contracted a rare form of Parkinson’s Disease. Its wasting effects slowly took over her body, but her mind remained clear to the end. Notwithstanding the bodily insults, she remained a role model for us all, facing the pain and indignities with fortitude and unfailing good humor.

In lieu of flowers, contributions may be made to the Jeanne Thornhill Ulrich Memorial Fund at St John's Episcopal, Broad Creek. https://stjohnsbroadcreek.org