To share your memory on the wall of James Mayo, sign in using one of the following options:

Provide comfort for the family of James Mayo with a meaningful gesture of sympathy.

Print
James “Jim” Wellington Mayo, 89, a 9-year resident of Annapolis and previously of Bethesda, MD, passed away on January 7, 2020 surrounded by his family.

Born on March 2, 1930 in Atlanta, GA to the late James and Thelma Mayo, James ea... Read More
James “Jim” Wellington Mayo, 89, a 9-year resident of Annapolis and previously of Bethesda, MD, passed away on January 7, 2020 surrounded by his family.

Born on March 2, 1930 in Atlanta, GA to the late James and Thelma Mayo, James earned a BS degree in Math from Morehouse College, a SM in Mathematical Physics from Howard University and his Ph.D. in Physics from MIT. James served his country in the U.S. Army from 1953-1955. He worked for the Department of Energy as the Division Director for Electrochemical Systems and for the National Science Foundation, Science Education Division. James had a passion for education. He was the Associate Provost for Sponsored Programs at Catholic University and was the Founder and Department Chairman of the Morehouse College Physics Department.

A parishioner at Holy Family Catholic Church in Davidsonville, MD, James was also a member of Phi Beta Kappa and the National Institute of Science. His interests included science, music, tennis and studying foreign languages.

A Memorial Mass will be offered on Friday, January 17 at 10 am at Holy Family Catholic Church, 826 W. Central Ave., Davidsonville, MD 21035. In lieu of flowers, contributions may be made in James’s memory to Hospice of the Chesapeake, 90 Ritchie Hwy., Pasadena, MD 21122 (hospicechesapeake.org/giving) or to Morehouse College, Office of Institutional Advancement, 830 Westview Dr. SW, Atlanta, GA 30314 (giving.morehouse.edu).

Please take a moment and leave James' family a condolence by using the tab on this page.
Read Less 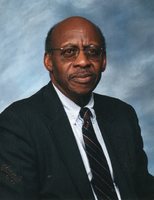