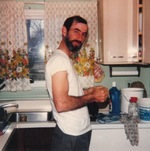 Jack loved the grandkids and always would be the first to get on the floor and open up Christmas presents when they hosted Christmas Eve at their house. He was overjoyed when the first great-grandchild was on the way. He wore his Great-Paw Paw shirt very proudly.

Jack as he was known to friends and family grew up working on the farm and eventually joined the Navy as a young man and became a boiler technician. While in the Navy he traveled the Mediterranean Sea area. He learned to water ski while in Malta and was able to tour different areas while in port. He also was on one of the destroyers deployed during the Cuban Missile Crisis. Toward the end of his short Navy career he met Janet in Annapolis, Md. and knew she was the one for him.

Upon release from the Navy; Jack got serious with Janet and they were married in November 1965. After their marriage he worked at Scott’s Lumber in Edgewater before taking over as Farm Manager of Willow Lake Farm in Davidsonville, Maryland upon the death of his father.

Jack started working for Ferguson Trenching Company in 1977. He continued to work for them for 36 years until he had to medically retire. Jack loved his work and had great stories to tell about it. He knew Ft Meade like the back of his hand since he did most of the work laying gas pipe there.

He worked hard to support his family and make Janet happy. They lived a frugal life nothing fancy or extravagant. They enjoyed going yard-sailing every Saturday they could.

Jack was a simple man and enjoyed his TV shows and reading his crime books. Once Janet passed he slipped into sadness and didn’t speak much about her or the things they used to do together.

He moved in with his daughter Jessica in November 2019 after the sale of his house. It was difficult for him to not be on his own and have that independent nature he’s always had however, health issues took priority over being alone in his house. He was stubborn and definitely stuck in his ways but he did his own thing.

During the COVID pandemic he would give a play by play of what he watched on the news. Jessica advised him to stay home to be safe but not Jack, he was out running the roads. Jack did what he wanted to do in his own time. His 4:30am runs to the local McDonald’s, to being ready for doctor’s appointments hours ahead of time. He was a special breed of man that they don’t make anymore and he will be missed by many.

In lieu of flowers please make a donation to one of the following: Maryland Farmers Association,or click here to donate online for the Veterans Association.