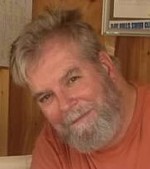 James Paul “Jim” Coulter, 66, of Arnold, MD died July 16 after a courageous battle with cancer. He was the son of the late Edward and Raphael Coulter of Pinellas Park, FL. He spent his childhood in Greenbelt, MD and graduated from Parkdale High School. Jim began his career at the Washington Post as a press operator, rising to crew chief and eventually retiring as a buyer in the Purchasing Department. He is survived by his wife of 26 years, Sylvia Filipovic Coulter; daughters, Carolyn Ward (Jeff) of Stevensville, MD and Lauren DeMunda (Todd) of Viera, FL; stepdaughter, Samantha Boardman (Frank) of Shrewsbury, MA and grandchildren, Violet and Charlotte DeMunda, Garrett and Aubrey Ward, and Ellie Boardman. He was preceded in death by brothers, Wayne and Bruce Coulter (Debbie). Also surviving are two sisters, Mary Ellen Woolard (Joe) of Brooksville, FL and Patricia Lowry (S.L.) of Mechanicsville, VA, as well as numerous nieces and nephews. A lifelong Marylander, Big Jim enjoyed Nationals baseball, observing the wildlife in his backyard, and making his famous spaghetti sauce. Most importantly, he loved his grandchildren and spoiling them as only Granddaddy could do. He will be dearly missed by everyone whose lives he touched. Messages of sympathy can be left by clicking the Memory Wall link on this page.