To share your memory on the wall of Hazel Fentress, sign in using one of the following options:

Receive notifications about information and event scheduling for Hazel

We encourage you to share your most beloved memories of Hazel here, so that the family and other loved ones can always see it. You can upload cherished photographs, or share your favorite stories, and can even comment on those shared by others.

Justin Miller, Roger Miller, Ray Miller and Kim & Steve Matalik, and other have sent flowers to the family of Hazel Sherman Fentress.
Show you care by sending flowers

Posted Jul 19, 2019 at 09:09am
She was so loving and caring to me even after Mike and I got divorced. I meant her when I was 15 years old and I have loved her ever since. She was my second mom for almost 50 years and I am going to miss being able to call her and talk with her. She was a beautiful person and had a wonderful heart. I will always cherish the time I had with her for her wisdom and encouraging words. I love you, Mom, and I will miss you until we meet again. Love, Sandy
Comment Share
Share via:
JM

Posted Jul 18, 2019 at 06:52pm
Hazel, You have lived a long and full life. My Grandmother, Leta, was your neighbor and I enjoyed having long conversations with you. You are missed

Posted Jul 16, 2019 at 06:13pm
Our thoughts and prayers go out to Hazel's family. She brought joy and happiness to all who met her and she will be deeply missed by everyone.

Posted Jul 16, 2019 at 11:40am
I will always remember Hazel as a vibrant woman who had a zest for life, pushing out into new experiences with great enthusiasm! She held tightly to her perspective and she let you know it! Go Hazel! She has been a wonderful friend to my mother Joan, who spoke with her just about every day. They shared a journey over these past 20 years that has been a blessing to both of them. I praise the Lord for the years that He gave her. She will always be remembered fondly. Our prayers are with the family. Praying the Lord Jesus will grant you comfort and His presence as only He can. 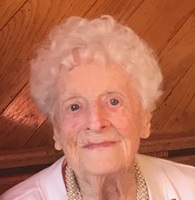