To share your memory on the wall of Floretta McFadden, sign in using one of the following options:

Receive notifications about information and event scheduling for Floretta

We encourage you to share your most beloved memories of Floretta here, so that the family and other loved ones can always see it. You can upload cherished photographs, or share your favorite stories, and can even comment on those shared by others.

Jane, Suzanne Sakmar, and other have sent flowers to the family of Floretta Beasley McFadden.
Show you care by sending flowers

Guaranteed hand delivery by a local florist
AM

Posted Oct 13, 2020 at 03:33pm
Anne and Dick Maio
Our sincerest sympathy to the McFadden family of the passing of Floretta.
We knew Floretta from Our Lady of Perpetual Church.
Both she and George were strong and faithful members of the parish.
We still enjoy the beautiful altar accessories that were donated in George's name.
Floretta was a dear lady and we will miss her vibrant personality.
Sorry that we could not be there physically to greet the family. We did have that pleasure at George's funeral.
You have been great family to both George and Floretta.
Warmly, Anne and Dick Maio
Comment Share
Share via:
KM

Posted Oct 11, 2020 at 04:59pm
For over 70 years, Mother has been a wonderful part of my life and I will miss seeing her and helping her navigate these last years of her life. She was such a loving mother, grandmother and great grandmother. You couldn’t ask fo better. My love forever, Kenny
Comment Share
Share via:
RC

Posted Oct 11, 2020 at 04:14pm
To the McFadden family,
Our heartfelt condolences for the loss of your darling mother. She was a very, very special lady.
To Soey,
We will never forget the wonderful times we spent together in Italy. They were fantastic years! Thank you for the memories. May you rest in peace Soey.
Arrivederci. Ivo and Rita
Comment Share
Share via:
FC

Posted Oct 10, 2020 at 10:01am
What a wonderfully genuine and joyful woman! Your mother and father were so devoted to one another and a privilege to know. Heartfelt prayers to your family as you share a lifetime of special memories.
Florence Calvert
Comment Share
Share via:
JM

Posted Oct 09, 2020 at 08:14pm
Beautiful, joyous Soey will live forever in my heart. I send my love and sympathy to you ; her children, their spouses, and all of her grandchildren and great-grandchildren. You are a wonderful continuation of her life. Jane.
Comment Share
Share via: 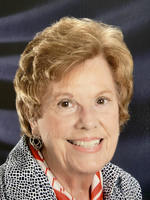