To share your memory on the wall of Everett Dove, sign in using one of the following options:

Provide comfort for the family of Everett Dove with a meaningful gesture of sympathy.

He was preceded in death by his wife of 62 years, Audrey Evelyn Dove.

Friends are invited to celebrate Everett's life on Sunday, January 5 from 2 to 4 and 6 to 8 pm at the Kalas Funeral Home & Crematory, 2973 Solomons Island Rd., Edgewater, MD where his funeral service will be held on Monday, January 6 at 11 am. Interment will follow at Lakemont Memorial Gardens Cemetery in Davidsonville, MD.
Read Less

We encourage you to share your most beloved memories of Everett here, so that the family and other loved ones can always see it. You can upload cherished photographs, or share your favorite stories, and can even comment on those shared by others.

Posted Jan 04, 2020 at 11:42am
My heart , thoughts and prayers are with you all. I will miss Uncle Everett's humor and laughter. We shared a lifetime of memories with all of you that I hold close to my heart each and every day. I pray it brings you peace to know of the wonderful reunion he has experienced now with Aunt Evelyn and all the family and friends that went before him. Heaven sounds sweeter all the time. Much love to you all. - Cousin Patti
Comment Share
Share via:
M

Posted Jan 02, 2020 at 08:33am
I extend my heartfelt sympathy to the Dove family. May those precious memories of your dear loved one Everett be foremost in your hearts and minds along with this wonderful promise that our creator makes to us at Revelation 21 v 4 and the marvelous guarantee in verse 5. Again, my sincere condolences.
Comment Share
Share via:
CS

Posted Jan 01, 2020 at 09:23am
Please accept my most heartfelt sympathies for your loss... My thoughts are with you and your family during this difficult time. 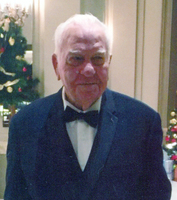