Obituary for Edward B. "Breen" Miller 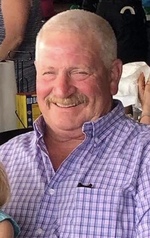 Edward Breen Miller "Breen", 63, a twenty-five year resident of Caroline County, MD, died on Saturday, October 5, 2019, at Nanticoke Memorial Hospital in Seaford, DE. Born on September 24, 1956, in Annapolis, MD to the late “Winkie” and Colonel “Reds” Miller, Breen started life with a love of agriculture, farming on his family's Fox Hall Farm in Anne Arundel County, growing tobacco and produce. He soon became a long haul truck driver for 20 years and could tell you whether to turn left or right in New Mexico or where to catch the best SOS in Utah. After a few years running an excavation business, his wheels stopped rolling as he settled into a job with Maryland Environmental Services at the Ridgely Landfill, where he served as maintenance supervisor and mentor to his co-workers, whom he cared about immensely. Breen loved his community and was an active member of the Ridgely Lions Club where he was King Lion in 2011- 2012. He would often be seen scooping ice cream at the annual Strawberry Festival and playing in the annual golf tournament. Settling into home life, Breen loved cooking and tinkering around his yard and garden with his trusty dogs by his side. He also loved cats and everyone knew that if he saw a stray, it would soon have a loving home full of treats. He enjoyed deer hunting with his kids every year though there was great suspicion that he fell asleep in his stand. In more recent years, he delighted in spending time with and reading to his grandchildren, looking forward to a new granddaughter, Laney, in January 2020. Breen is survived by his daughter, Leslie Breen (Logan) Milby of Cordova, MD and son, Miles Edward Miller of Oakland, CA; his siblings, Norman "Rusty" Miller of La Salle, WA and Cam Miller (Joe) Kozik of Churchton, MD; his grandchildren, Landon Breen and Lucy Wyatt Milby, niece Heather Buhaj and children of Churchton, MD and several lifelong friends; He was preceded in death by his nephew, Spencer Kozik. Funeral service will be held at Christ Episcopal Church, 220 Owensville Rd., West River, MD on Saturday, October 12 at 1 pm. Interment will follow in the church cemetery. Contributions may be made to the Ridgely Lions Club, P.O. Box 143, Ridgely, MD 21660 or the Caroline County Humane Society, 407 Belle St., Ridgely, MD 21660.

Please take a moment and leave a condolence for Breen's family by using the link on this page.