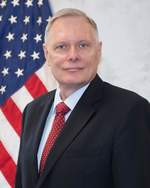 Two days before his death, he completed a lifetime goal and earned his Doctorate in Philosophy in Organizational Leadership from Regent University. Those that knew him best loved him for his work ethic, determination, positive attitude and good heart. He lived his life in pursuit of achieving his dreams, taking care of his wife and family, and getting the job done. He was a good man who believed in his country, believed in hard work, and was willing to lead by example in all phases of his life.
Dr. Novikov has been serving as the Joint Project Lead for Radiological and Nuclear Defense at the Joint Program Executive Office for Chemical and Biological Defense at Aberdeen Proving Ground, Maryland for the past 16 months after serving as the Deputy Joint Project Manager for Radiological and Nuclear Defense for 2 years. His previous assignments included the JPEO-CBD’s Chief of Strategic Initiatives and Deputy Program Manager for JPEO Support Services.

He held a Bachelor of Science degree in Computer Science and Business Administration from Hawaii Pacific University, a dual Master’s of Science degree in Operations Research and Industrial Engineering from the University of Texas at Austin, and a Masters of Arts degree in National Security and Strategic Studies from the Naval War College. His last academic achievement was earning a Doctorate in Philosophy in Organizational Leadership from Regent University.

Friends are invited to celebrate Dr. Novikov's life at the Kalas Funeral Home & Crematory, 2973 Solomons Island Rd., Edgewater, MD on Thursday, December 12 from 2 to 4 and 6 to 8 pm. Mass of Christian Burial will be offered at St. John Neumann Catholic Church, 620 Bestgate Rd., Annapolis, MD on Friday, December 13 at 10:30 am. Interment, with full military honors, will take place at a later date. Condolences may be made by using the Memory Wall link on this page.