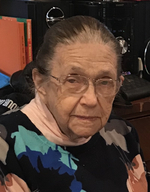 Dorothy Lucille Hines, “Lu”, 96, a resident of Arnold, MD since 1958, died on Saturday, December 5, 2020 at Anne Arundel Medical Center. Affectionately known as “Nanna” to her grandchildren, she was born on September 7, 1924 in Annapolis, MD to the late Robert and Edna Pearl Lamb. Lu was raised in Annapolis and was employed as a financial officer with the Department of Defense at Ft. Meade. She was an avid, record setting, accomplished duckpin bowler and Severna Park Lanes has been her home away from home for many years. She enjoyed knitting, sailing and being around the water. Lu loved spending time with her grandkids and with the pets. She was always up to sneak out to adopt another with her granddaughter, Rachel. Lu was preceded in death by her husband of 43 years, Richard Hines and her daughter, Janice Hines, who passed when she was very young. She was also preceded in death by her siblings, Robert, Albert and Henry Lamb and Barbra Lee. Lu is survived by her children, Richard Hines, Jr. of Galesville, MD, Robert Hines of Pasadena, MD and Julie Hines Maccari of Arnold, MD; her grandchildren, Marki, Rachel, Bubba, Kaitlin, Kevin, Keith, Charlotte and BJ and her great-grandson, Mason, with Kailtlin expecting another on the way. Funeral service will be private. In lieu of flowers, contributions may be made to the SPCA of Anne Arundel Co., 1815 Bay Ridge Ave., Annapolis, MD 21403. Condolences may be made by using the Memory Wall tab on this page.