To share your memory on the wall of Dorothy Ford Suitt, sign in using one of the following options:

Provide comfort for the family of Dorothy Ford Suitt with a meaningful gesture of sympathy.

Print
Dorothy E. Ford Suitt, “Gee Gee”, 98, a resident of Edgewater, MD, passed away at her home from complications of dementia on Monday, May 11, 2020, surrounded by her family.

Gee Gee was born on October 10, 1921 to the late William and Mary Ward. She worked as a cafeteria manager for the Anne Arundel County Public School system. She was a devoted member of Chesapeake Christian Fellowship in Davidsonville.

Services will be private at this time. Dorothy will be interred with her husband, Vernon E. Ford, Sr. at Hope Chapel Cemetery in Edgewater.
Read Less

Receive notifications about information and event scheduling for Dorothy

We encourage you to share your most beloved memories of Dorothy here, so that the family and other loved ones can always see it. You can upload cherished photographs, or share your favorite stories, and can even comment on those shared by others.

Posted May 14, 2020 at 06:14pm
Deepest sympathies as you grieve the loss of GeeGee. She was a treasure and will be greatly missed. Love and prayers to all.

Posted May 14, 2020 at 08:48am
Brandon and family, please accept our condolences on the loss of your Gee Gee.. We are praying for peace and comfort for you all as you grieve.

Posted May 13, 2020 at 09:29pm
With Deepest Sympathy to Diane, Vernon, their families, and all of her grandchildren. Aunt Dorothy was so special to everyone. I will never forget how kind & loving she was to our family. I have many childhood memories spending time at her house. There are so many memories from camping to driving to Tennessee and the list goes on. Home cooked meals & snapping green beans from her garden for dinner. She will never be forgotten. Love, Dana Cosgrove & family
Comment Share
Share via:
GL

Posted May 13, 2020 at 09:12am
Dorothy, you kindness and grace was immeasurable. Your life a blessing, your memory a treasure, you were loved beyond words and will be missed beyond measure. Love, Gene and Pam
Comment Share
Share via:
TH

The Harnish's purchased flowers for the family of Dorothy Ford Suitt. Send Flowers 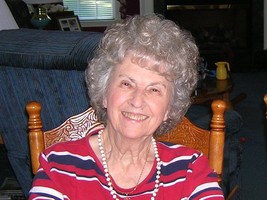