To share your memory on the wall of Dolores Fash, sign in using one of the following options:

Provide comfort for the family of Dolores Fash with a meaningful gesture of sympathy.

Receive notifications about information and event scheduling for Dolores

We encourage you to share your most beloved memories of Dolores here, so that the family and other loved ones can always see it. You can upload cherished photographs, or share your favorite stories, and can even comment on those shared by others.

Posted Oct 21, 2019 at 12:57pm
I knew Dolores from the widow/widowers group, Phoenix Rising. She invited us to her lovely home for a pot luck dinner several years ago. She was a great woman and will be missed.
Comment Share
Share via:
B

Posted Oct 17, 2019 at 08:21am
Dolores was a lovely lady! I will miss seeing her and talking to her at Ranger Rosary. She loved to talk and laugh! She made our Ranger Rosary meetings a fun time! God you, Delores. Peg B.
Comment Share
Share via: 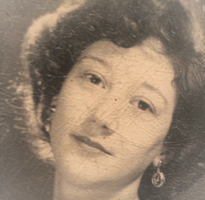