To share your memory on the wall of Brian King, sign in using one of the following options:

Provide comfort for the family of Brian King with a meaningful gesture of sympathy.

We encourage you to share your most beloved memories of Brian King here, so that the family and other loved ones can always see it. You can upload cherished photographs, or share your favorite stories, and can even comment on those shared by others.

Posted Mar 23, 2019 at 08:58am
We were just talking about a new motorcycle project!
Soar with the Lord My Bother

Thank you for sharing these photos.
JB


I express my deepest condolences for the loss of your love one. In the Bible, God expresses death as a "sting." (1 Corinthians 15:55,56) So this means that behind death, there is a painful hurt. He also knows what it is like to experience losing a love one as "he did not spare his own son but handed him over for us all." (Romans 8:32) But soon God will do something amazing. "All those in the memorial tombs will hear his voice and come out." (John 5:28,29) God will use his Son to bring back all our dead loved ones to life! What a joy that will be! There, God "will wipe out every tear from (our) eyes and death will be no more neither mourning nor outcry nor pain be anymore."(Revelation 21:4) So yes, although experiencing the temporary sting of death, we will have the prospect of joy living on a paradise earth free of death forever!

Again, sorry for your loss.

This is beautiful, Thank you.
SM

Posted Mar 19, 2019 at 09:33pm
We are so sorry for your loss.
Shelley is Mary Vienneau's daughter.
God bless & RIP Uncle Brian.
Comment Share
Share via:
MV

Posted Mar 19, 2019 at 07:52pm
Brian, you said you would go directly to heaven.
Sure hope you did Bro just show St. Peter your
hard working hands and he should let you right
in. Hope to be with you some day. Missing you.
Comment Share
Share via: 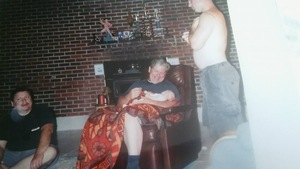