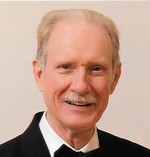 Calvin "Bill" Willard Curlen, JR a 15 year resident of Heritage Harbour, Annapolis and previously of Bowie passed away on Sunday, May 31, 2020. He was born on December 16, 1940 in Virginia to the late Calvin and Pauline (nee Windemaker) Curlen. Bill was a graduate of Penn State University where he earned a degree in Electrical Engineering after which he served in the U.S. Air Force obtaining the rank of Captain. He was employed at NASA for 30 years. Bill enjoyed skiing, cycling and all forms of dance. In addition to his parents Bill was preceded in death by his siblings, Hubert, James and Marie. In addition to his wife of 40 years, Glennis Barham Curlen, he is survived by several nieces and nephews, Mark and Dawne Curlen, Daniel and Teresa Curlen both of Carlisle, PA, Barry and Joy Enck of Loysville, PA, Kenneth and Susan Enck of Altoona, PA, David Enck of Loysville, PA, Robert and DeNise Enck of Alexandria, VA, Robert and Kit Curlen of Hanover, PA, Steven Curlen of New Rochelle, NY, Diane Slebodnick of Ocean View, DE. In lieu of flowers contributions may be made to the Alzheimer's Association, 1850 York Road, Suite D, Timonium, MD 21093. Interment will take place at a later date at Westminster Cemetery in Carlisle, PA.