To share your memory on the wall of Bernhardt Pyles, sign in using one of the following options:

Provide comfort for the family of Bernhardt Pyles with a meaningful gesture of sympathy.

Bernie was a very proud Marine. He enjoyed cooking and was a big supporter of the local DC Sports teams. He enjoyed watching movies and sports on the TV.

A viewing will be held on Thursday, February 6, 2020 from 11a.m. until time of Funeral Service at 12 p.m. At the St. Paul United Methodist Church, 6634 St. Barnabas Road, Oxon Hill, MD 20745. A graveside service with US Marine Corps Military Honors will be held at Maryland Veterans Cemetery, Cheltenham, MD at 2:30 p.m.
Read Less

We encourage you to share your most beloved memories of Bernhardt here, so that the family and other loved ones can always see it. You can upload cherished photographs, or share your favorite stories, and can even comment on those shared by others.

Posted Jan 19, 2020 at 01:52pm
Sherry, My condolences to you and family. Bernie was a best friend during the years we worked together. Blessings.

Vincent Meredith purchased the Blooming Garden Basket and planted a memorial tree for the family of Bernhardt Pyles. Send Flowers 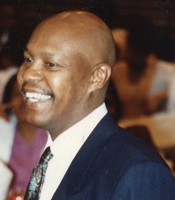