To share your memory on the wall of Adam Jentilet, sign in using one of the following options:

We encourage you to share your most beloved memories of Adam here, so that the family and other loved ones can always see it. You can upload cherished photographs, or share your favorite stories, and can even comment on those shared by others.

Posted Mar 11, 2020 at 02:55pm
Dear Mary and family,
So very sorry to hear of the passing of your father, Adam. He was my Mentor in the Religious Education Program when I first came to Holy Family in 1981. He was very kind man and his love of God was always so obvious to me. I felt very empowered by your father's advice when I started to teach CCD. Adam was always available to share ideas on the Religious Education Program. Not only was he my Mentor but he was a friend and my life was greatly BLESSED because Adam was my friend.
Comment Share
Share via:
MR

Posted Mar 03, 2020 at 01:12pm
Dear Mary and family, I had the privilege of knowing Adam as a very kind and generous man at our parish of Holy Family. Adam truly was one of the very loyal and dedicated founding fathers of Holy Family. He made sure the CDC program was working even when we had no gathering space or classrooms for the children. He made ambos for the church and stands for the classrooms--he lovingly and faithfully set up the chapel EVERY DAY for mass. As his sight started to become a problem he trained some of us "not to replace him" but to carry on his work. His dedication to his God, parish and family were on display for all. Thank you so much for sharing him with us. God bless and I know he is in his Eternal Reward. Mary Robinson
Comment Share
Share via:
D

Thank you for sharing your wonderful memories and kind thoughts. I remember the days well of Dad overseeing the Sunday School program before there were any classrooms. He had to get very creative. :)
M

Thank you, Mary. Your words to me, personally, and your memories here, mean so much to us. Holy Family was a very special place for Dad from the moment he stepped foot in the Chapel all those years ago. He was an amazing man.
TS

Posted Mar 03, 2020 at 07:36am
The Steppe family would like to send our thoughts and prayers during this difficult time to Mark and the entire Jentilet family.

What a lovely thing to do, Dad would love that. Thanks so much for your kindness.
M

What a wonderful idea! I'm sure Dad will keep on eye on and nurture that tree forever! Thank you!
LD

Posted Mar 02, 2020 at 06:53pm
Adam, God Bless you and your wonderful family! May you rest in peace in God's gentle hands, Please say hello to Mike Sr and Tina! Love, Kelly Family

Loretta, Mike Jr. Tim and Doug purchased the Love's Tapestry for the family of Adam Jentilet.

Posted Mar 02, 2020 at 01:36pm
Mary and family, We are so very sorry for your loss. Your Dad was an amazing man! So very talented, kind and generous. He will be missed by many. Praying for your family at this time, Vickie, Bart and Brandie
Comment Share
Share via:
D

Vickie - I met your husband at the viewing but did not get a chance to meet you. Thanks to you both for your kind words and for coming to the viewing and services. It was very much appreciated.
M

Vickie - As usual, your words, actions, and thoughts are treasured. Thank you. 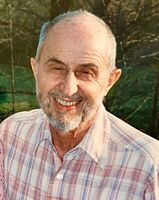