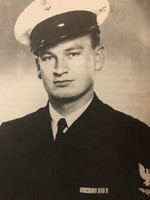 Mr. O’Brien, 102 years old, was born in rural Natchitoches Parish, Louisiana on June 3, 1917. He passed on June 18, 2019, in Fort Washington, MD. Growing up under difficult circumstances after the death of his mother when he was eight-years-old and the onset of the Great Depression at age 12, he forged a remarkable career and a reputation as a kind and cheerful optimist.

After working for the Civilian Conservation Corps, he enlisted in the U.S. Navy in 1938. During the war, he saw action in the North Atlantic, Mediterranean, and Pacific Theaters, most notably the Philippines, Iwo Jima, and Okinawa. He attained the rank of Chief Petty Officer, served on the staff of Rear Admiral Calvin T. Durgin, and was awarded the Bronze Star after a kamikaze plane struck his ship, the USS Natoma Bay.

Committed to public service, he worked to support orphanages in Louisiana. Assisted by the Federal Bureau of Investigation, he formed a citizens committee that investigated and prosecuted public corruption within the state government and judiciary.

After an unsuccessful campaign for Congress, he was hired by the U.S. Department of Justice Tax Division in 1953 where he prosecuted criminal tax cases for most of his career. He was appointed Deputy Assistant Attorney General for the Tax Division during the Ford Administration.

Upon retirement, Mr. O’Brien gave pro bono legal assistance to many genealogical, patriotic, and hereditary organizations as a national officer, member, or friend, including Sons of the American Revolution, First Families of Connecticut, the Crown of Charlemagne, and Early Quakers. On April 12, 2014, the National Huguenot Society awarded him the NHS Distinguished Service Medal, one of his prized possessions.

He is the author of two books, “Our Colonial Ancestors,” a genealogical study, and “An American Experience, The First Ninety-Three Years,” an autobiography.

He is survived by his wife, Neoma, and four children, Terrence C. O’Brien of Venice, California, Kathleen E. O’Brien Lockwood of Reston, Virginia, Michael S. O’Brien of Waldorf, Maryland, and Daniel J. O’Brien of Redondo Beach, California, as well as four grandchildren and one great-granddaughter.