We're sorry but the candle you have selected is currenty in the process of being purchased or has just recently been purchased.

Please feel free to select another candle or check back in 15 minutes to see if the candle you have selected has been released for purchase.

We're sorry but there are no candles available for lighting.

You have already begun a candle purchase session. If you would like to continue with your current candle choice please click "Continue" otherwise please click "Select Another".

In Memory of
Thomas Owens
Dixon
1923 - 2017
Click above to light a memorial candle.
This Book of Memories memorial website allows family and friends a place to re-visit, share and enhance this tribute for future generations.
Open Full Navigation
Close
Menu
Click here to
Send
Flowers

In the event that there is an error
in the information presented,
please contact the funeral
home by clicking here. 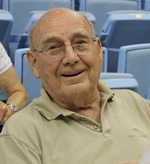 Thomas Owens Dixon, a 12-year resident of Edgewater, MD and previously of Lanham, MD, died on Friday, July 21, 2017, at his home in Edgewater, MD following a three year battle with prostate cancer. He was 94.
Born May 11, 1923, in Roanoke, VA, to the late Paul A. and Christiana Mariah Kinsey Dixon, Tom earned his Bachelor of Science in Electrical Engineering from Virginia Polytechnic Institute in 1947 and a Master’s degree in Public Administration from American University. During World War II, Tom served in the US Army 203rd Anti-Aircraft Artillery (Automatic Weapons Battalion) using his engineering and math skills to direct fire on enemy aircraft, V2 rockets and later in the war, enemy positions. Tom trained in the U.S. and Scotland and participated in combat in France, Belgium, Holland and Germany. His battalion was among the U.S. combat forces that met the Russian forces at the Elbe River near the conclusion of the conflict. From 1947 to 1955, Tom worked at the Naval Research Laboratory, specializing in precision measurements of underwater sound instrumentation, where he made the first deep-water underwater sound propagation measurements between submarines and surface ships. In 1955, he moved to the National Security Agency, where he remained until 1989, specializing in the design of HF radio equipment, HF antennas, and field testing of experimental equipment, mostly overseas. After retiring from the government, he designed large computer-controlled antenna switching systems that were used worldwide. While consulting for Aiken Advanced Systems, he was responsible for the development of two patents for signal distribution systems technologies. Tom was also one of the principal founders of Utica Systems, which became Digital Receiver Technology (DRT), where he served on the board of directors until its acquisition by Boeing Corporation. Tom was a member of Lanham United Methodist Church for 50 years. He was four times the president of the Potomac Chapter of the Maryland Society of Professional Engineers, and in 2009 was elected an organization Fellow. He was also a member of the American Legion and the Veterans of Foreign Wars (VFW). He enjoyed computers, woodworking, gardening, model railroading, boating, and RV camping.
Tom was preceded in death by his wife, of six years, Eva Mach Dixon; his first wife, of 53 years, Mary Merchent Dixon; a son, James E. Dixon; and four siblings, John Paul Dixon, Joseph Dixon, Barbara Dixon Ely Embree and Gladys Ann Dixon Keeney.
He is survived by his companion of five years, Kathryn Tauber; three children, Thomas O. Dixon, Jr. and his wife Brenda of Lothian, MD, Ellen Dixon-Tulloch and her husband Michael of Hillsborough, NC and Judy Dixon of Severn, MD; five grandchildren: Morgan E. Dixon of Seattle, WA, Emily E. Dixon Danforth and her husband Ben of Bethesda, MD, James D. Windsor of Severn, MD, Melissa Windsor Diamond and her husband Brian of Newport News, VA and Luke O. Dixon of Lothian, MD; and 2.5 great-grandchildren.
Friends may call at the George P. Kalas Funeral Home, 2973 Solomons Island Road, Edgewater, MD on Wednesday, July 26 from 10 am until a funeral service begins at 11 am. Interment will be at Cedar Hill Cemetery, Suitland, MD. In lieu of flowers, the family requests donations in Tom’s memory to Chesapeake Bay Foundation, Attn: Membership Department, 6 Herndon Avenue, Annapolis, MD 21403 or online at www.cbf.org. An online guestbook is available by visiting the link on this page.

This Book of Memories brings those affected by loss together by encouraging communication and self-expression. By giving friends and family a special place to tell their stories and express their feelings of loss, it helps them care for one another during a very difficult time. Click on any of the links to the right to access features or information within this memorial website.